The Race for Indian-Americans

Interesting data.  According to polling by Lake Research Partners published by Rediff recently,  76% of Indian-Americans are leaning toward voting for Obama, with only 8% saying they will vote for Romney.

Quite soon we will be publishing a detailed analysis on the positions of both candidates vis-a-vis issues important to Indians and Indian-Americans. 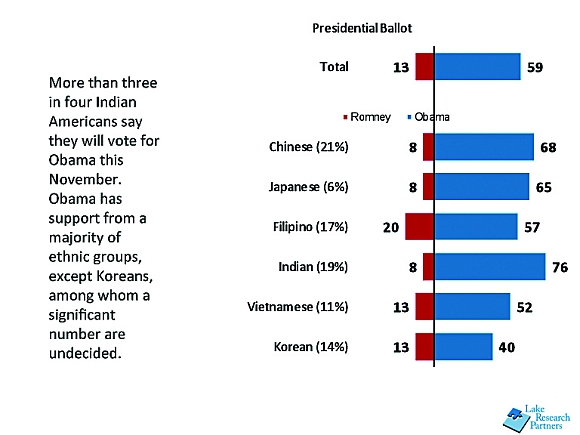 Dear President Obama, we understand that you are in the thick of a close presidential race.  We know the realities of modern politics and the silly season, and respect your right to attack Governor Mitt Romney on any number of issues.  There’s certainly plenty of material to work with.  Romney has been doing it to you too, and it’s fair to help voters understand his background through your speeches and advertisements.

However, we draw the line when you make something out to be unacceptable while you are intelligent enough to know better.  It leads us to believe you are being intellectually dishonest for purely political purposes- and it’s an insult to your audience.  Surviving in office through these means is not worth it.  It is unfair to bash Romney over outsourcing jobs to call centers in India for the following reasons.  I will be sending this to your campaign staff and I expect a response on each of these items- and will be happy to publish all of them. END_OF_DOCUMENT_TOKEN_TO_BE_REPLACED

The Indian rupee has continued falling steadily against the US dollar this May, breaking new record lows continuously through recent weeks.  The free fall continues, and as of today the magic number stands above 56.  This news is unwelcome to Indians in an environment that includes severe hikes in Indian fuel prices, and dramatic drops in Indian stock market indices.

Some of the causes and consequences may seem obvious, while others appear murky in the crystal ball.  Below is a pithy analysis. END_OF_DOCUMENT_TOKEN_TO_BE_REPLACED

Cheerleaders and Cheer Queens of the Indian Premier League: A Controversial History

Ready or not, cheeerleaders  are now a common sight in India and a class of American import in a league of its own.

If you attend virtually any U.S. junior high school, high school, college, or professional basketball or football game, you are likely to find cheerleaders, pep bands, or marching bands in action, working hard to energize the athletes and entertain the crowds.  These are a deep-rooted part of Americana, a tradition woven into the very fabric of many thousands of communities nationwide over the course of a century and half of a sports-crazed country’s history.  Female cheerleaders and majorettes are sometimes known for their skimpy clothing and semi-suggestive dance moves, yet they fit snugly into the wholesome tapestry of deep-rooted American culture.  Parents and parochial institutions in fact often encourage their daughters to join cheerleading squads.

END_OF_DOCUMENT_TOKEN_TO_BE_REPLACED 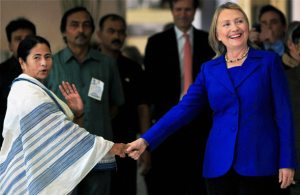 And you thought Hillary was short

US Secretary of State Hillary Clinton visited India from May 7-9 as part of a larger Asia swing with an itinerary encompassing China and Bangladesh.   Coincidentally or not, Indian Finance Minister Pranab Mukherjee was on hand in Dhaka during Clinton’s two-day stopover in Bangladesh, the first by a sitting US Secretary of State since the arrival of Colin Powell in 2003.  This came right after her nearly week-long visit with China, where most headlines focused on the controversial high-level negotiations over the fate of blind human rights activist Chen Guangcheng.

END_OF_DOCUMENT_TOKEN_TO_BE_REPLACED

As a New Yorker, I was pretty excited to meet Prashaant Kumar, an up-and-coming Bollywood actor who was entirely raised in the New York metro area.  Prashaant was born in Booth Memorial Hospital of Flushing, Queens and lived in locales such as Forest Hills and Manhasset on Long Island while growing up.  Prashaant decided to leave the United States behind for good four and a half years ago to try and make it in Mumbai’s legendary film industry.  His previous role was in India’s first-ever creature-based horror film called Kaalo released in 2010, about an evil old desert-witch.  The 29 year old Kumar’s next film called Issaq will be out in July.

This man’s personal story arc intrigued me for several reasons.  How and why would an Indian-American actor- who was getting some acting experience Stateside, who had family and friends there- head to India to find his destiny?   How does an American adjust to the pollution, traffic, chaos and craziness that is Mumbai, or the dramatic ins and outs of Bollywood life and its infamously dark side, with no contacts in the industry?  My goal for this face-to-face interview was to find out these things. END_OF_DOCUMENT_TOKEN_TO_BE_REPLACED

You’d smile too if you were confirmed as Ambassador

A historically significant paradigm is playing out in U.S.-India relations, somewhat below the radar, receiving minimal fanfare because the meme about Iran sanction disagreements between the two nations has dominated headlines.  With all the gender inequality still pervasive in both countries, it’s appropriate to applaud some girl power when we see it.  With the successful confirmation of Nancy J. Powell to the post of U.S. Ambassador to India, and her reporting for work on April 19, 2012 there is an unprecedented level- by far- of female leadership guiding the delicate bilateral relationship today. END_OF_DOCUMENT_TOKEN_TO_BE_REPLACED 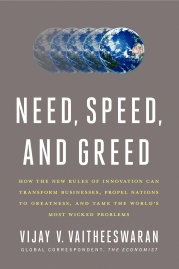 Vijay V. Vaitheeswaran  is an award-winning global correspondent for the Economist magazine and author of the new book, “NEED, SPEED, AND GREED:  How the New Rules of Innovation Can Transform Businesses, Propel Nations to Greatness, and Tame the World’s Most Wicked Problems” (HarperBusiness, March 2012).

The book claims to debunk the following myths:

END_OF_DOCUMENT_TOKEN_TO_BE_REPLACED

LinkedIn’s “Jewel in the Crown”

The professional networking site isn’t just a big hit in developed countries—it’s growing like gangbusters in emerging nations like India.

Enigmatic and multi-dimensional, India is a land of aesthetic splendor and stark contrast. It is a place that at once arouses the senses and titillates the psyche.  Framed by the Himalayas to the north, the Indian Ocean to the south, and sharing borders with six countries, its expansive countryside is punctuated by mountain ranges, urban landscapes, deserts and beaches.

From its dense, over-crowded metropolitan centers to its quaint, dirt-road villages and sparsely populated outreaches, India is a hotbed of diversity and culture.  India is also a global business hub that is consistently ranked as one of the fastest-growing economies in the world. END_OF_DOCUMENT_TOKEN_TO_BE_REPLACED