VIDEO: Does the Simpsons’ Apu Need a Do-Over?

Comedian Hari Kondabulu gave millions of Indians around the world a voice by tackling the subject of Apu from the multi-decade hit cartoon sitcom, The Simpsons.  He decided to make a documentary film called “The Problem with Apu” on TruTV which asks some fundamental questions about Apu and why he has to be the way he is.  As we all know, Apu is a minstrel with a fake accent and his appearances comprise an unending parade of unforgivably unfunny stereotypes of an Indian convenience store owner in any town USA.

So ingrained is Apu on the world’s consciousness that when I went to a remote region of Brazil where they never see any Indians, many of the locals nicknamed me Apu for the week.  This is literally the first thing that people who have never met Indians think about when they see an Indian.

The documentary is worth watching, whether you believe Indians are being way too sensitive about Apu, or you are outraged by the minstrel portrayal of Indians by white voice actor, Hank Azaria.  Above you will see the TruTV trailer. 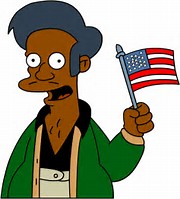