← Hymn for the Weekend (In 1942): How Beyonce and Cold Play Messed Up
CALL TO ACTION: Nominate & Confirm Sri Srinivasan for US Supreme Court →

McDonald’s is a special phenomenon, and I know this from my own life experience as a lifelong customer and former employee.  Every six months or so, I get a fierce craving for a Big Mac and french fries, or an Egg McMuffin with a hash brown, and it must be fulfilled.  I’ve been hooked since childhood thanks largely to the Happy Meals, a bit of tasty marketing genius that evokes warm, fuzzy, fond memories both conscious and subconscious for millions of adults long after they have stopped craving cheap plastic toys in a colorfully illustrated box with their lunches.  As children, no less.  In my opinion, McDonald’s french fries are also far and away the best around; their formula for fries just works, and always has in my mealy memory.  The consistency of flavor no matter where you eat McDonald’s is amazing to behold, especially when you consider that there are 34,000-odd restaurants in 120 countries and territories.

In 1996, just as I was toiling at my first paid, post-paper route job (minimum wage, $4.25 an hour) in a McDonald’s near Cleveland, Ohio, the first franchise in India was opened up by the restaurant chain in New Delhi.  India is certainly a potentially huge market for fast food.  However, the country poses a formidable challenge for McDonald’s, for several reasons.  The company’s very vaunted brand is based on cow meat, the specific protein that a majority of Indians will never, ever put in their mouths.  McDonald’s would also need to compete against a large variety of high-quality local delicious Indian 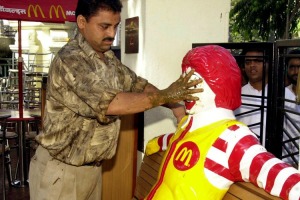 food that is generally more healthy, and packed with spices and flavor.  Finally, some Indians are so proud of their heritage that they will always see foreign fast food chains as an affront.  So, how is McDonald’s doing at beef-free year 19 in India amid the successes and challenges encountered thus far, and where is it headed?

As you can see, some Hindu activists are NOT amused.

It’s worth noting that India in the mid-1990’s represents the first market in the world where McDonald’s made an executive decision to alter its menu fundamentally and dramatically from everywhere else. Beef was completely taken off the menu for India, and new lines of sauces and vegetarian options were added.  This decision represents the risk for foreigners doing business in India.  It forced McDonald’s to drop its signature sandwiches and launch into a new country selling things neither they nor anyone else had ever sold anywhere before.  The Hamburgler’s reason to exist was ended.  On the other hand is the potential promise for a company that is world-renowned for its dependable sameness, if it could just adapt to the local tastes and get a first-mover fast food foothold before the inevitable competition from Domino’s, KFC and Subway arrived to crash the party.

The results are interesting.  I had my first McDonald’s meal in India with my father in Bengaluru in 2012.  I ordered a Maharaja Mac, the equivalent of a Big Mac but made with chicken instead of beef or ground lamb, which McDonald’s originally rolled out in India and then shelved unceremoniously.  I didn’t like the sandwich that much, especially in comparison to the real MacCoy (bun intended).  The chicken was bland and the sauce was unfamiliar.  But I was favorably impressed by the fries- as golden brown and delicious as any US branch would serve it- and the excellent service by the Indian staff, who immediately cleaned up a spill on the floor of the dining area that I brought to their attention.

The Structure.  McDonalds India  is broken up structurally into two geographic sections: North/East and South/West.  This is in itself a recognition that India is not a homogeneous ferment of brown people as some other multinationals view the country.  Those of us familiar with India understand how different the regions are from one another culturally, and most importantly, in terms of taste.  We know that breakfast is radically different from north to south; as are lunch and dinner too. 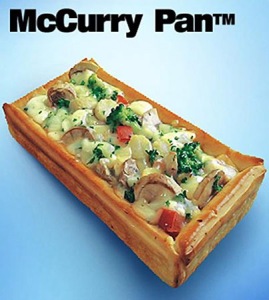 The PETA-friendly Option.  Even more revolutionary, McDonald’s is testing out a concept that would have made the founders like Ray Kroc turn over in their hamburger-financed coffins.  The company is opening up new vegetarian-only restaurants, a concept that on its face simply doesn’t make existential sense.  No Big Macs, cheeseburgers, chicken nuggets, or Sausage McMuffins?  Not even a little Filet-O-Fish?  The answer is, none of the above.  McDonald’s is opening new outposts of its brand completely devoid of animal flesh in India as you read this.  My personal opinion is that we will see a reverse-export phenomenon in the future: someone with a lumberjack beard and flannel in Williamsburg chowing down on one of these McCurry Pans.

So what do they serve in these PETA-friendly restaurants?  Some things most of us have never heard of, such as the McCurry Pan- a doughy, edible receptacle filled with spiced vegetables an Indian aunty could appreciate with her evening tea.  Veggie nuggets or paneer cheese sandwiches with Indian style sauces are another one.

I’m loving it.  The reason why I am wishing McDonald’s all the luck is because it is an interesting market-based experiment on a global scale.  Let’s say McDonald’s India creates some interesting new vegetarian concoctions that may be tasty to people in other countries- including the United States itself.  I have no doubt that eaters in places like San Francisco, Brooklyn or London would ravish a cost-effective and quick McPaneer.

I don’t know if this will happen, but I look forward to finding out.

← Hymn for the Weekend (In 1942): How Beyonce and Cold Play Messed Up
CALL TO ACTION: Nominate & Confirm Sri Srinivasan for US Supreme Court →