usindiamonitor Applauds Nomination of Kenneth Juster for US Ambassador to India

usindiamonitor was overly underwhelmed that the position of US Ambassador to India had been left vacant for many months since January 2017.  That’s when former Ambassador Richard Verma last roamed the halls of the US Embassy and left behind not only the hot air of New Delhi, but also a legacy of forward progress in the US-India relationship.  Obama’s pick was also much appreciated by many Indians worldwide as the first Indian-American to hold the post.  Trump promised less than one year ago that India would be America’s best friend as he lit up a Hindu diva in New Jersey, stoking the hopes and dreams of innumerable Indian-American voters along with a wonderful lamp.

Do best friends leave Ambassador posts to one another unfilled for that long, especially if the relationship is as superlatively non-controversial and bipartisan as the US-India nexus today?  Maybe not.  But in June, promising murmurs circulated about a certain Kenneth Juster being appointed to the post, an unexpected announcement which nearly served to make up for the time lapse.  Senate confirmation based on Juster’s qualifications seemed a given due to his tried and true negotiations with India.  Opposition either domestic or bilateral seemed unlikely to cause real impact.

Yet several more long months of silence on this matter followed, as the White House and its attendant media were consumed by other, baser affairs.  On September 5, Juster was finally nominated to be the 26th US Ambassador to India.  We urge rapid action by the US Senate to confirm Juster without delay when he comes up to vote this week.

So, who is Kenneth Ian Juster?

Juster had overseas proclivities generally, and toward Asia specifically from an early age.  As a Harvard undergraduate he studied abroad in Thailand, and served as a research assistant to Samuel P. Huntington, one of the foremost political science gurus in United States history.  Juster’s resume includes substantive stints in both the public and private sectors, and in each area the work took him beyond the water’s edge.  He came to know the levers and pipelines of federal bureaucracy at the White House, State Department, Department of Commerce, National Security Council, and National Economic Council.  On the other side, Juster was respected by private sector colleagues at entities such as salesforce.com, power law firm Arnold & Porter, and private equity shop Warburg Pincus, all of which have global operations. 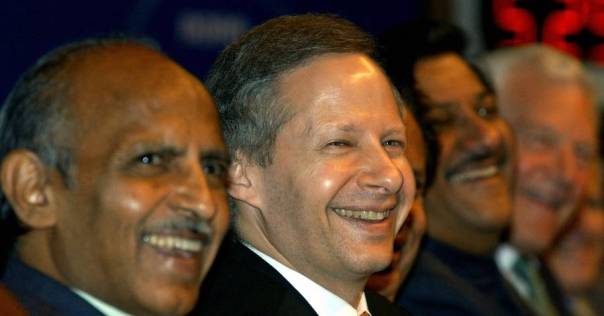 When it comes to US-India diplomatic relations, Juster is among the limited pool of Americans who have found themselves deep in the arena over the years- and yet became accepted as true friends of India by Indians.  This pool is relatively small, shared by members such as previous Defense Secretary Ashton Carter, the aforementioned Richard Verma, the late Congressman Stephen Solarz, and former Ambassador Robert Blackwill.  Unlike many in the US foreign policy establishment and particularly in the US State Department, these figures generally didn’t condescend towards their counterparts even if they had to play hardball.  Indians have never viewed this as a given.  Small wonder that Narendra Modi and his team approved of Juster’s nomination.

Juster is known for helping initiate a High Tech Cooperation Group between the two countries in the early 2000’s, at a time when technology trade and transfer were nowhere near the powerhouse level they have now reached.  Today, it’s impossible to keep up with the daily flow of US-India tech deals, mergers, and acquisitions.  Some of this is finally creeping into the military realm, including the potential for big-ticket US toys such as the Marine One helicopter and the F-16 fighter jet to be made in India, while American drones and other cutting-edge hardware may be sold to the Indian military, all for the first time.

Juster is even better known for what followed, playing a key role in the multi-year negotiations that culminated in the 2008 civilian nuclear cooperation deal, to this day a jewel in the crown of bilateral trade, but one which still has a long way to go to fulfill its promise.  Nuclear exchange is nowhere near where it could be.  Even so 2008 represented the end of a long and difficult climb since 1998, a year when India secretly tested nuclear weapons in the sands underneath the Pokhran desert, angering the United States, prompting sanctions against India, and setting the relationship back by years.  There has been a steep climb since 2008 as well to address a myriad of concerns with the deal.

It won’t hurt that Juster has Trump’s ear and has for some years especially on economic matters.  There are many challenges in play.  A rising China and the bitter escalation with North Korea are going to affect the entire Asian neighborhood for the foreseeable future in this, the Asian Century.  The nuclear exchange could stall on matters such as liability.  Reduction in the flow of Indians coming to the United States to work and study  under the Trump administration should be of serious concern to both countries.  Intellectual property and the monitoring quality of drug manufacturing in India for US sales are in need of mutually agreed upon swim lanes.  Afghanistan, which has been in turmoil for 40 years will rely heavily on US-India cooperation if it’s ever to stabilize.  Future cooperation will also depend on how the United States and Pakistan deal with each other, an issue that India will study more closely than all others.

It is possible that Juster will be part of a much anticipated seismic shift, toward the first mutual defense treaty between the United States and India, befitting for the world’s oldest democracy and the world’s largest.  There are many steps and pitfalls along the way, but we consider this eventuality to be inevitable the way things are going.  Might as well get on with it.

Juster will have his hands full upon arrival in New Delhi.  But for now, it’s time for the Senate to do its job and confirm the qualified nominee.  This is also a very good time to thank Mary Kay Loss Carlson, the US Charge d’Affaires in New Delhi, for holding down the fort during the long interim period.  We also applaud the Trump administration for making a good decision in this critical area of foreign policy.  If only there were more of them.