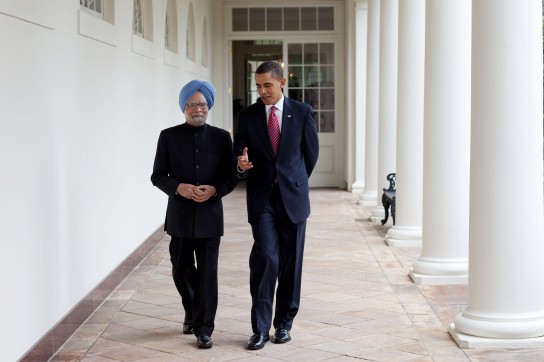 Hey Man(mohan), my hair’s gotten whiter since last time, how about yours?

Indian Prime Minister Manmohan Singh has a date with US President Barack Obama in Washington on Friday, September 27th.  There will be a short meeting, a joint press statement, lunch at the White House, and a private tea for the first ladies.

This is the second time Mr. Singh goes to Washington to meet Obama formally.  The last time was in 2009, when the Obamas hosted the Indian Prime Minister and his wife at the very first White House state dinner of the Obama era with a great deal of pomp and ceremony.

Much of the promise of closer cooperation has gone unfulfilled over the last 4 years, as we wrote in a previous post.  Chalk it up to issues of trust, authentically disparate worldviews, and extremely vocal domestic opponents of diplomatic progress.

To be fair, both countries have had their hands full with a wide range of domestic and international challenges.  Just this week, the Obama administration has been distracted by the nervous flirtations with Iranian President Rouhani and a feeble attempt to get tough on the Syrian regime at the UN General Assembly, even while the US Congress is desperately trying to scuttle Obama’s signature healthcare law and quite possibly shut down the US government.  India, meanwhile is facing a downward spiral of its currency and a drastic slowdown in its economy, with higher than normal violence along the Pakistan border and in Kashmir.  India’s legislature is just as gridlocked as America’s.  We see no end in sight for any of these issues.

It will likely be their last one-on-one at the White House, or anywhere.  Obama did visit India in 2010 and may do so again while president. However, a major Indian election looms in 2014, and Singh is not likely to be the premier to greet him in New Delhi the next time.  The Obama-Singh relationship can safely be described as warm, but not close.  What can we expect from their September 27th confab?

In the best-case scenario, Obama and Singh will make real policy announcements in several areas that have been long slogs in the making and could be defined as critical to the relationship.  My best guess is that we’ll see some progress on 2 of these 4 items.  Movement on 3 would be a very, very good day.  If all 4 are moved forward, it would be the equivalent of a royal flush with all the chips on the table: a historically epic day in US-India relations.  Some of the rhetoric coming out of Washington and New Delhi lately has given some commentators hope- while others complain that it’s just going to be business as usual, flowery words without the substance.

Interestingly, in two cases I believe the onus is more on the United States and in the other two, on India.

1) A Bilateral Investment Treaty (BIT).  Capital movements between the two countries are subject to numerous and confusing regulations and by and large characterized by contention.  Since 2006 both nations have been negotiating over terms that would allow companies to conduct business with reasonable dispute resolution mechanisms.  In a nutshell, this has not progressed much in 7 years, though trade itself has boomed despite the hindrances.  An example is India’s complex stance on foreign investment in the retail sector, which affects American companies just as any other.  While the Indian government’s desire to protect the growing local retail sector is understandable, India desperately needs an infusion of foreign cash like an accident victim who needs a blood transfusion to stay alive.  Onus: India

2) The US-India Civil Nuclear Deal.  Under the Bush administration, the United States pushed through this landmark deal that was supposed to be a harbinger of cooperation between the two nations on building and upgrading nuclear facilities for power generation in India, at a time when the country is starving for electricity from any possible source and American companies would love selling their technology to a huge new market.  Obama’s team has continued its support for the agreement in principle, yet since 2008 virtually no business deals have been concluded between US companies and Indian counterparts.

This stagnation is a result of many factors, the foremost being liability, who is responsible for it, and whether to cap the liability in case of disaster.  American companies would be subject to unlimited payouts to Indian entities in the event of an accident, just like a doctor who could be sued for unlimited amounts for malpractice- and have to pay up as far as the courts allow.  It should not be so hard to come up with a solution agreeable to both sides on this simple insurance standard, one which is happening apace globally.  The deal has been an international embarrassment, and the time has come to either proceed or give up on the idea entirely.  Onus: India

3) Immigration Upgrades  American companies, Indian companies, and US universities are lobbying hard to increase immigration quotas for H1-B (skilled labor) visas.  Innovation and corporate bottom lines are quite clearly at stake, and yet the US immigration regime only allows in a tiny fraction of the growing pool of applicants each year.  Meanwhile, many qualified people who attend university in America are forced to leave the country due to the difficulty of obtaining the visa to stay on and work.

Standing on the other side of the debate are those politicians who want Americans to get more of the jobs being taken by foreigners, and others who are genuinely afraid of a large influx of families from other countries changing the American cultural landscape.  They probably do not realize that Americans are either unable or unwilling to do many of the jobs taken by those who come in on H1-Bs, and it’s the American economy as a whole that suffers.  Onus: USA

4) India Gaining a Seat to the UN Security Council.  We can just say verbatim what has been said for several years.  This is a long shot for any palpable progress.  Obama and Biden have maintained their support for bringing India in as a permanent member the UN’s National Security Council, that most exclusive body of great powers, but it does not appear that the United States government is pursuing this goal with the focus that is required.  While the prospect has been given a lot of ink in the press, a timetable has not materialized, and the path is still murky.  Onus: USA

There is lots more on the larger US-India table: climate change cooperation, defense sales and military cooperation, a partnership on vocational education and community colleges, USAID development initiatives, etc.  While all these are important, they are not the sort of initiatives that occupy the time of global leaders like Obama and Singh.  Meanwhile, both countries have given up on trying to present a united front on Iran and Syria; their differences in approach are irreconcilable and there is little to discuss.  India does not believe in red lines, and does not want force in either case.

The four items above are what Obama and Singh will probably discuss.  An announcement incorporating 2 out of the 4 wouldn’t be half bad.  But a royal flush would be better.

Posted on September 27, 2013, in Commerce, Politics/Diplomacy. Bookmark the permalink. 1 Comment.